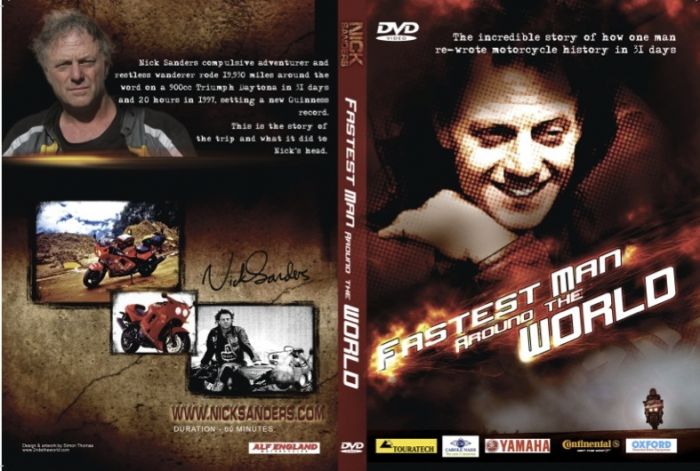 Nick Sanders compulsive adventurer and restless wanderer rode 19930 miles around the word on a 900cc Triumph Daytona in 31 days and 20 hours in 1997. Setting a new Guinness Record.
This is the story of the trip and what it did to Nick´s head.

This was my first motorcycle film based on the 31 day record ride I did in 1996. Working in association with Eric and Pam Michel at FM Television down near Henley on Thames, it was one of the first ever made for TV motorcycle documentaries. Without doubt it superseded The Long Way Round series as a concept and was broadcast on the Granada Television owned 'Men & Motors' channel, the then brand-leader of automotive televisual content.

I had already biked around the world on an Enfield several years earlier so the idea of riding around the world again but quickly appealed. It certainly suited my racing temperament having been a semi-pro bicycle racer in the late '70's. I managed to pull together 3 sponsors, IBM, Triumph and Mobil Oil, which was an amazing triumvirate of 3 blue ribbon companies. Triumph loaned me their last of the range Daytona 900, IBM supplied the ThinkPad and created and ran the website and Mobil financed it as the major player. This project was, as are all my record rides, solo and unsupported. On a personal level and just before I left London, found out I was going to be a dad for the first time. At 37 I'd left it a bit late but soon to be wife Henrietta was pregnant with Willow Indian Summer, a little lad, who was born some time after I got back. Leaving London's Battersea Park one blustery spring morning was not easy, especially as there were some real dangers ahead. This was my job and as every pro bike rider knows, you understand the risks and just get on with what you have to do. I said good bye and set off on the first ever speed record journey around the world on a motorbike.